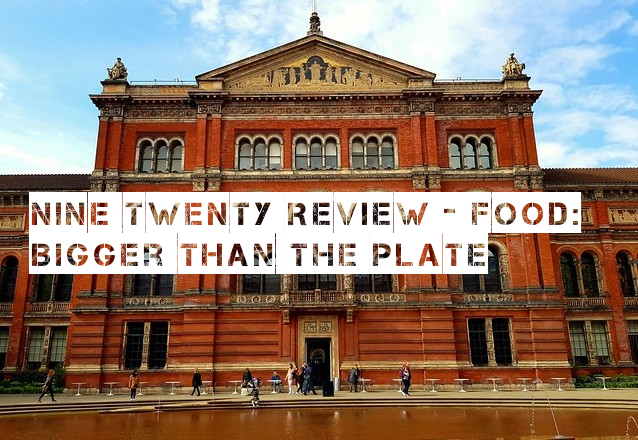 The issue of food production is permeating mass consciousness. Climate-conscious veganism, demand for ethically sourced produce and awareness of biodiversity are all on the rise, and this is changing the way food is produced and consumed. In only a few decades, a lucrative market for organic and sustainable products has emerged. With these changes at hand, Food: Bigger than the Plate has come at an important time. The V&A exhibition takes the viewer through four stages of our food system: composting, farming, trading and eating.

To represent the complexities of the global food system in four rooms is a huge undertaking. The exhibition focuses mainly on the responses to or “fixes” for acute problems within the food system, featuring contributions by artists, designers and businesses. It announces a desire “for a food system that is more sustainable, fair and delicious” and offers us a sense of empowerment, declaring that “the future of food is in our hands. Nothing is off the table”. Sounds good to me…

Most of the exhibits that captivated me highlighted the negative outputs of the global food system. For instance, the Totomoxtle (Fernanado Laposse) project, which is about reintroducing heirloom corn varieties back into Tonahuixtla, a small village in Mexico. The project uses the by-product (colourful corn husks) as a vaneer material, which increases the value of the corn. It was only necessary because agribusiness firms had sold locals the dream of genetically modified, high-yielding corn hybrids. These more expensive, less hardy plants need particular pesticides to grow, and over time the cost of pesticides have increased. They have also wreaked havoc on the land. By reintroducing native corn varieties that grow without pesticides, the project has not only increased biodiversity (and therefore food security) but also boosted the local economy.

Our Daily Bread (Nikolaus Geyrhalter and Wolfgang Widerhofer), a video piece, documents the faces, tools, factories, animals and landscapes of EU food production. Without the use of narration, it paints a dystopian picture; the faces of the workers reminded me of paintings of peasants from the 17th century, the tools look like they belong on building sites, the factories are overwhelming, the animals hang motionless from hooked conveyor belts and the landscapes are vast, hedgeless, monoculture fields. These indelible images cannot help but make you question your values. The mystery is why they are shocking or alien – we eat this food three times a day.

Supernatural (Uli Westphal) is another clever piece, a highly stylised triptych of rural imagery collaged onto three light boxes. Images normally seen on supermarket products are meshed together to give the sense of nature. It highlights how branding and marketing detach the consumer from the grim reality of mass-produced food with idealised “natural” images.

“The future of food is in our hands. Nothing is off the table”

The 1894 avant-garde poster Lait pur stérilisé de la Vingeanne by Théophile-Alexandre Steinlen advertised the scientific breakthrough of pasteurisation. As this new process improved the shelf life of milk, the railways improved access to market and milk became a commodity that could be traded further than a few miles from the dairy. It sits in the same room as a raw-milk vending machine from Fen Farm Dairy, based in Suffolk. Current UK law states that raw milk can only be sold at the dairy of origin, hence this invention, which informs the farmer by SMS to refill the vat when it is running out of milk. These two pieces simultaneously represent progress and regression, harking back to a pre-industrialised food era.

It is hard not to look back for inspiration when thinking about our food system and how it can be sustainable in an uncertain future. However, while the exhibition draws attention to the failures of the current food system by exhibiting clever workarounds and offering contrasts to the past, something is missing. The UN’s Food and Agriculture Organisation estimates that 80% of agricultural land is committed to producing livestock, yet only produces 18% of the world’s calories. Big Food and Big Agricultural companies hardly get a mention here, and become the elephant in the room. Many of these companies are the biggest in the world by market capitalisation; only a few thousand firms are the conduit between millions of food producers and billions of consumers. These firms hold nearly all the power; many are monopolistic, multinational corporations who evade proper scrutiny and pay little tax. Why don’t we hear more about them? By hardly acknowledging their existence, the exhibition’s organisers have allowed the often murky dealings of this industry to go unchecked once again.

At best, the exhibition politely asks you to be more conscious of the food system. It does not suggest an alternative, nor does it question or explain how the current system has come about. The exhibition highlights some of the conscious resistances to the status quo, but these are non-confrontational conversations with power. Our Daily Bread touches upon how “current methods of intensive agriculture are affecting climate change, depleting natural resources and reducing biodiversity”. But all the other pieces circumvent these big issues around our food system. At this important time, by not highlighting concentration of power amongst distributors and retailers, the V&A has missed an opportunity to educate the public about the commercial food system which we all engage with every day. For now, the future of our food remains off the table.

Food: Bigger than the plate runs at the Victoria and Albert Museum until 17 November 2019.